I have to say I am delighted to get the chance to do an unofficial and retrospective appraisal as the NODA support rep for the area. We all know and love the characters of ‘Allo ‘Allo through the many years of TV exposure.

Unlike the stage version of Dad’s Army which features 3 TV episodes this is a comedy written specifically for the stage – and how brilliantly funny it still is. Whenever one sits down to watch a show as a NODA rep you start beavering away with the pencil making notes which you hope you can still read over the next few days. On this occasion I must trust my memory so here goes!

How did you do? I saw the play on the first night during a heatwave amongst a small audience but we had a great evening. We received your typical friendly front-of-house greeting on our arrival with a well organised box office and raffle. The French-influenced supper at the interval was well planned, delicious and served by very friendly waiters and waitresses.

Your director Cindy Linley who I know is a very experienced and able director and actor was sitting nervously at the back of the hall. You did a great job with an unusual blend of highly experienced and totally novice actors. You used the very clever set fully with lots of movement and gave us in the audience a lovely show sending my party home chuckling. I can now understand why you were so enthusiastic having seen the show earlier in Hyde Heath. The pace of the show considering this was the first night only dropped on a couple of occasions, most notably during the saucy sausage scene! And I thought that the front of stage extension could have been utilised more which would have saved some lengthy scene changing. Perhaps you could have used an extra pair of hands backstage?

Lighting and sound worked well and overall the costumes were very good with the exception of some of the men’s uniform trousers a couple of which looked like old creased Chinos – perhaps the budget didn’t stretch! Make-up was very good as were hair and wigs. A general point – I am always a little disappointed with some male actors’ reluctance to transform their look with a more suitable period hairstyle. The terrific set looked authentic and worked superbly – well designed and constructed. The more experienced actors in the main carried the show brilliantly, cue bite was sharp, comic timing and voice projection good. The novice actors will learn from this and hopefully they enjoyed the experience and will come back for more. It’s a great hobby and it should be fun!

John Jensen (Rene) aged and sized up well and gave a very competent or should I say incompetent performance, super accent, good comic timing, excellent projection – well done. Liz Peskin (Edith) was quite superb, a very accomplished actor you obviously enjoyed this gift of a part. Ruth Corner another lovely performance as Michele. Every line was delivered with panache, your accent was well maintained throughout. Alan Brown was wonderful, you slipped very well into the part of the camp Gruber, great timing, projection, accent and brilliant “face”. Yvette. Catherine Greenwood and Rosalind Vergopoulos (Yvette and Mimi) were just right as Rene’s two cheeky waitresses, sexy and pitched just at the right level. Tina Barclay (Helga), Mark Cassidy (Colonel Von Strohm) good, competent performances. Phillip Sheahan (Leclerc) was marvellous, a nice cameo role for an obviously experienced actor, again great facial work. Jeremy Peters (Crabtree) – some nice moments but generally poor projection hampered performance. Some of the funniest lines in the show were lost, perhaps it was first night nerves – this difficult part is fraught with danger.. David Jones (Captain Bertorelli) – again some good moments, however your inconsistent accent meant some of the lines lost their humour. You do have a presence, I look forward to seeing you again.

Simon Patterson (General Von Schmelling) well cast, ideal look, well delivered lines, good solid performance and funny. Thomas Telford (Herr Flick) you improve every time I see you, you’ve got it Tom! You do have a good presence on stage.

All the airmen, soldiers and peasants looked good and played their roles well. Also a special mention must go to Linda Harper for her adept tinkling of the ivories.

In conclusion I would compliment St Peter Players on this very funny show – a good choice, well staged with some smashing performances – a really enjoyable evening, thank you. 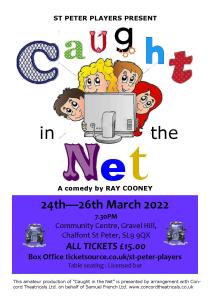